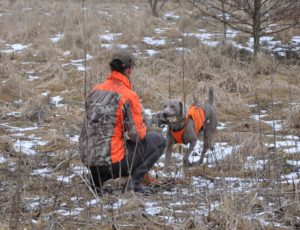 Ray started in open class on SDPK spring trials in south of Sweden this weekend. Result 2 x 2nd prize, judge Juha Åkerblom. The weather conditions were difficult and there was a lot of hare on the trial grounds. The first day started out with beautiful, sunny weather and a lot of partridge. Ray started out with racing speed and two very nice points on partridge. The numerous hare tracks disturbed her search style in the second run and more hare was to be found during the trial, which she could not ignore. The second trial day was cloudy, freezing cold and the wind was gaining strength with every minute. The ground was frozen and partially covered with snow, we started out with the search on the vast empty fields. Ray got out of hand in her first run – there were no birds, but a lot of hare around, she had fantastic speed and range, but hunted by herself and did not have much contact with me. The next runs were carried out in more dense forest area, where she was more focused, her search became purposeful and systematic. She made several points on pheasants, unfortunately we could not make use of all of the situations. In the end of the day I’m very happy with her drive, the ability to find game and her bird handling. She is such a fun gundog with a lot of potential!